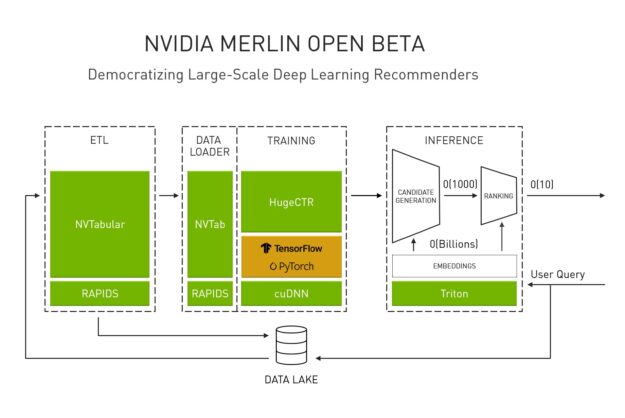 “NVIDIA Merlin is an open beta application framework and ecosystem that enables the end-to-end development of recommender systems, from data preprocessing to model training and inference, all accelerated on NVIDIA GPU. We announced Merlin in a previous post and have been continuously making updates to the open beta.

In this post, we detail the new features added to the open beta NVIDIA Merlin HugeCTR. New features include the Deep Learning Recommendation Model (DLRM), a state-of-the-art model that is a part of the MLPerf training and inference benchmarks. DLRM is now part of the HugeCTR model repository, with multi-GPU and multi-node training support. The Merlin open beta inclusion of DLRM in this latest release reaffirms the NVIDIA commitment to accelerating the workflow of researchers, data scientists, and machine learning engineers and democratizing the development of large-scale, deep learning recommender systems…”